News stories have always moved fast.  What screams from the headlines today is quite often forgotten in a few days’ time.  That’s why they say not to take too much notice if you feature in a news story…

(although now they seem to have been replaced by plastic containers instead).

One of the big news stories out of Washington over the past few weeks was headline news for a while, but has since been replaced by Turkey, The Kurds, Brexit and the Rugby World Cup. The reason it stuck in my mind was 3 words in Latin, ‘Quid pro Quo’.

The story was about a phone call between The President of the USA and President of Zelensky of Ukraine. In a released summary of the phone call President Trump asked President Zelensky if he could do him a favour and investigate the possibility of corruption surrounding Joe Biden.  Nothing to see here of course except Mr Biden is a contender to become the Democratic nominee for President in 2020 and could become a direct challenger to President Trump. I think that much has all sort of been agreed.

The Democrats cried foul, but the All the President’s Men said that yes there was a request for a favour, but there was no ‘Quid Pro Quo’. 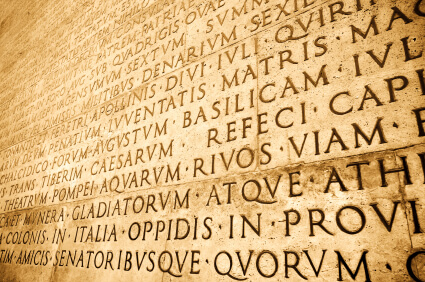 Now, my knowledge of Latin is limited.  I knew that my old Dynevor School moto, ‘Nihi Sone Labore’ meant, nothing without work.  When Brendan Rodgers become manager of the Swans I looked up his often used quote, ‘Ad astra per aspera’, to learn it meant through adversity to the stars. I’ve even used ‘Carpe Deum’ or as it is said in English, ‘seize the day’ in a couple of my songs.

What I’ve come to understand is that these Latin phrases contain a lot of wisdom and can sum up a situation better than many a more modern language.

So, back to Quid Pro Quo. Literally translated it means ‘Something for something’.  In the case of President Trump, the question is whether he offered something in return for help in getting dirt on a political rival. I’m sure that story will bubble along for some time, but it got me thinking about Quid pro Quo.

You scratch my back and I’ll scratch yours.  I give you this, you give me that.  It’s the very essence of how our society runs.  You work 40 hours a week and the bosses pay you.  We pay taxes and we get our bins emptied and we get to have the NHS and the army.  This all seems eminently fair doesn’t it; but what about when it doesn’t work.

What about the something for nothing society. People who take and don’t give back.  There is something grossly unfair about this which makes people’s blood boil and public reaction to such stories in the newspapers a few days later fill up the columns of their letters section.

But what about people who operate the other way?

People who do something or give something but don’t want a quid pro quo. Is it really better to give than to receive?

A couple of things this week have made me think.  Whatever your views on the Extinction Rebellion demonstrations in London they have certainly made headlines.  One of the stories that made me smile was when a giant pink Octopus was marched by a phalanx of police down Whitehall towards Trafalgar Square.  One commentator said the police should be careful as it might be ‘armed’. 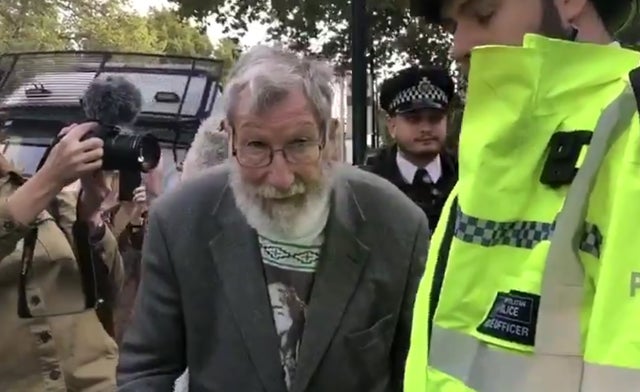 The story that made me think about ‘Quid Pro Quo’ centred on 91 year old John Lymes. John Lymes was arrested this week for sitting down in the middle of a road in Westminster to stop the traffic.  After a lifetime of an unblemished record this is the second time John has been arrested recently.  The last time was for doing something similar in Dover.

Why did he do it?  What was his quid pro quo?

Even if you believe the science, the effects of problems caused by greenhouse gases and Co2 now won’t really become critical for a number of years; with the best will in the world does it really matter to someone like John.  Surely he will be long gone before the world destroys itself.

I just found it incredibly moving to see a 91 year old man sitting on a main road in London armed with only a flask of coffee, trying in his own way to save the world he would never see.  What is it they say about leaders, they plant trees they will never sit beneath to enjoy the shade.

The second thing that happened to me this week involved a fox in my garden.  Quite often a fox will shelter underneath my garden shed.  I don’t really mind.  For me, the quid pro quo is that the fox gets shelter and hopefully in return he controls any vermin that might want to get into my shed.  What normally happens is if I want to use my shed I walk towards it making a little more noise than necessary and that gives the fox enough time to make a quick exit.

Except this week the fox didn’t move.  I walked up to it and saw that the fox was in a really bad state.  Its coat was matted, and its eyes were closed.  I rang the RSPCA.  They asked me to try a few things to see if I could get a reaction and the fox refused any attempt to be frightened into moving.  So, what to do next?  The fox was no benefit to me, but I couldn’t get it out of my mind.

I kept an eye on the fox until a couple of minutes before the RSPCA inspector arrived.  While my back was turned, somehow that poor piece of suffering animal managed to walk away into the woods behind my house.  The inspector and I looked for the next 30 mins hoping to find it without any luck.  It got me thinking about the RSPCA.  Saving the life of a fox doesn’t benefit anyone directly. I know the inspector was getting paid, but I got the feeling that she would have done the same thing for nothing if asked. Sometimes there is no Quid pro quo, it’s just doing the right thing while we can. 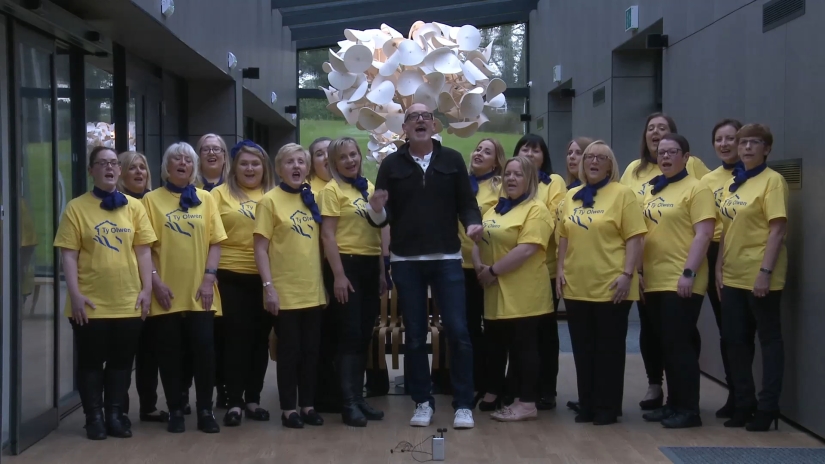 Finally, I come to the DVLA Ladies Choir annual concert. I got to know the ladies’ choir earlier this year when I was recording a song to celebrate 50 years of Swansea becoming a City.  I had already recorded choirs as far away as Singapore and Atlanta, but I wanted to reflect our local musical heritage and worked with the Morriston Orpheus and the Singleton Singers.  The DVLA choir were the icing on the cake.

When I was asked would I sing at their annual concert, I said yes.  It was a quid pro quo wasn’t it?  They sang on my recording; I would sing for their concert.  That’s only fair.  This year the ladies have been singing to raise money for Ty Olwen.  Now you could say that sadly, all of us in this community will probably have a family member or friend who will benefit from the facilities offered by Ty Olwen at some time.  Quid pro quo?  No not at all.  But singing together actually reaps its own rewards.  You only have to look at the choir when they sing to know that their ‘Quid pro quo’ is joy and pleasure at singing together. Singing and raising money makes them feel good about themselves, everybody wins, and to be honest if that is a quid pro quo, that’s the kind of deal I can live with. 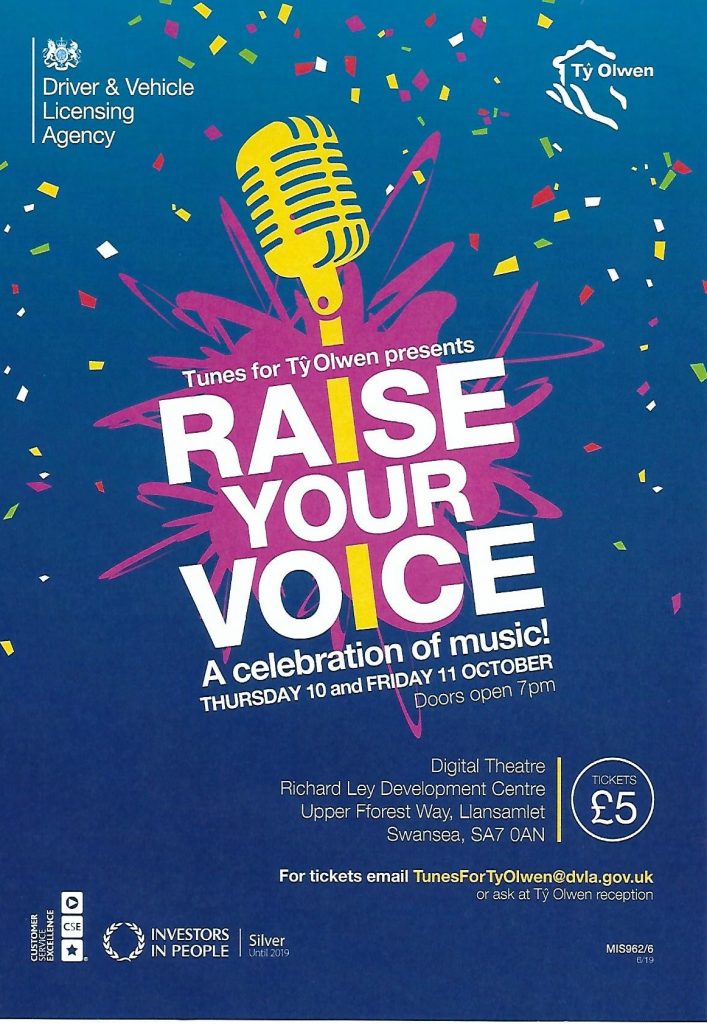